FA.B! | Event for the Family Based Care for unaccompanied children in Greece 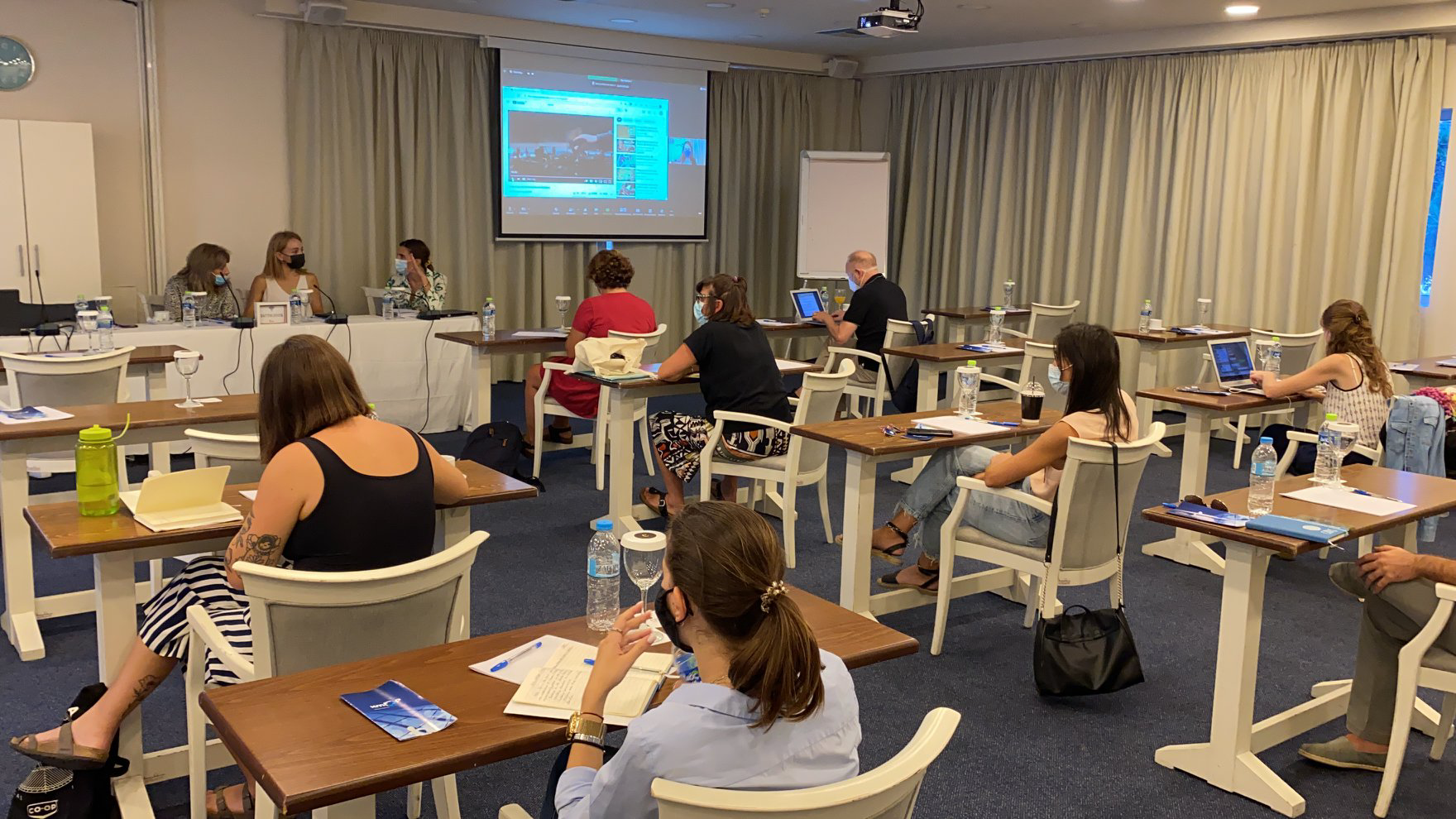 A two-day event on the challenges and good practices that can be followed regarding foster care for unaccompanied minors in Greece was organized by KMOP – Social Action and Innovation Center, within the european project FA.B! Family Based Care For Children in Migration. The event was attended by representatives from the Ministry of Labour and Social Affairs, the National Center for Social Solidarity, the Center of Social Welfare of Attica, the UNHCR, the UNICEF, METAdrasi, ARSIS and professionals who contributed by participating in the exchange of know-how, methodology and related tools for the provision of quality alternative care and personalised services to unaccompanied minors.

Opening the event, the Human and Fundamental Rights Unit Coordinator from KMOP, Ms. Irini Athanassiou, pointed out that family-based care is commonly recognized as the best way to facilitate integration and promote the well-being of children, reminding that the rights of the child are part of human rights. “These are rights recognized by the European Commission and the countries of the European Union must respect, protect and fulfil them,” added Ms. Athanassiou. Then the Psychologist, Researcher and Project Manager of the FA.B! project from KMOP, Ms. Iliana Konstantopoulou, referred to the objective of the programme which is to support, improve and expand alternative family-based care systems for unaccompanied migrant children in five European frontline Mediterranean countries (Italy, Greece, Spain, Malta, Cyprus) by involving in each country key public institutions and experienced private organisations.

Ms. Theodora Tsovili, UNHCR Senior Protection Associate spoke about the profile of unaccompanied minors in Greece. As she pointed out, there are 523 unaccompanied children in the Greek hinterland living in homelessness, in informal / precarious conditions, while 19% of them are outside the official system of care and protection. In the islands, Ms. Tsovili added, “there is a serious improvement of the situation after September 2020 (705 children), however the difficulties still remain”. Among the difficult conditions she described that there is limited access to basic necessities, medical care, safety and education. Indicative of the situation are the serious psychosocial problems that unaccompanied children experience due to living in inappropriate conditions (such as depression, self-harm and suicide attempts), while “all of them are at high risk of sexual exploitation, abuse and trafficking”. 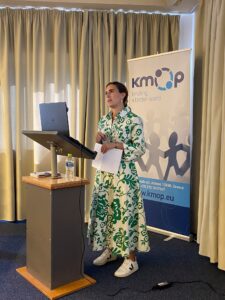 The Legal Advisor – Researcher from KMOP, Ms. Natasha Alexopoulou, also referred to the statistics concerning unaccompanied children. “One third of the refugees and migrants who have arrived in Europe are children. Greece, as one of the major entry points into Europe for refugees and migrants, has received over a million individuals since the beginning of 2015, 37% of whom are children” she said. Also, the Head of the Unit for the Protection of Unaccompanied Minors from the Ministry of Labour and Social Affairs, Ms. Voula Aroukatou, presented the latest published data. According to them, until last August (15/8/2021), there were 2,738 unaccompanied children in the country.

The Head of the Unit for Foster Care and Adoption from the Ministry of Labour and Social Affairs, Eleni Apousidou, and the Social Worker MSW-Psychologist, Head of the Department of Foster Care & Adoptions of the National Center for Social Solidarity, Giota Manthou, spoke during the event about the institutional framework regarding foster care in Greece and the “Anynet” platform. Regarding the prospective foster parents, Ms. Manthou said that “the requests are submitted only online, through the “Anynet” platform, causing less bureaucratic and time-consuming procedures”. From April 2019, she added, every citizen who wishes to become an adoptive or foster parent is connected from his/her computer, using his/her personal taxisnet codes, through the online platform www.anynet.gr and submits an application.

In this context, the Physiotherapist-Holistic Therapist, Ms. Iro Iordanidou, shared with the audience her own experience as a foster mother of a girl through the programme of METAdrasi. Then the Juvenile Probation Officer, Ms. Chara Galanou, referred extensively to the rights of children in adoption. The work of the first day was completed with a visit of all participants in the SOS Children’s Villages Greece. 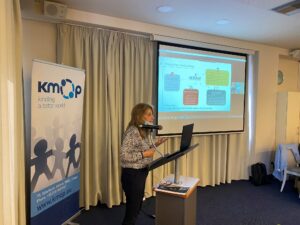 During the second day of the event, Ms. Olga Leventi described the foster care programme for unaccompanied and separated children of METAdrasi, which is being implemented since 2015. “The programme concerns families consisting of spouses or individuals, with or without biological children, who wish to take care of and raise an unaccompanied minor. It is not an adoption program, but a program through which a family can take on hospitality of a child for a shorter or a longer period of time, according to the child’s needs” explained the Project Manager of the Foster Care Scheme of METAdrasi.

Ms. Danae Serafeimidi, Child Protection Advisor from the UNICEF Greece Country Office, referred to the 24-month pilot program (2020-2022) implemented by the organization, in cooperation with the European Commission, in seven member states (Bulgaria, Croatia, Germany, Greece, Italy, Lithuania and Spain). The programme aims to ensure that children and young people in Greece, including children in migration, have improved access to family and community-based care, support services and inclusive education. Referring to the foster care challenges, Ms. Serafemidi pointed out that there is a lack of foster carers compared to the increased number of children in need of foster placement. In particular, according to the official data published in July on paidi.gov.gr, there are 620 children for foster care compared to 88 approved foster carers.

Finally, Ms. Sara Markou, Psychologist, Systemic-Family Therapist from the Center of Social Welfare of Attica, referred to the issue of foster care in public institutions, focusing on the work of “Mitera” Center for the Protection of the Child of Attica. The social worker from ARSIS, Ms Evdokia Avaliani, spoke about the U-CARE Project, which was implemented in collaboration with the International Organization for Migration (IOM) and ARSIS and concerns alternative forms of residence for unaccompanied children.

FA.B! Family Based care for children in migration is a project aimed at supporting the improvement and expansion of alternative family-based care systems for Unaccompanied Migrant Children (UMC) in five European frontline Mediterranean Countries: Italy, Greece, Spain, Malta and Cyprus. CIDIS is the project leader, that coordinates, and supports the other five partners (KMOP, HFC, FONDAZIONE ISMU, porCausa, JRS MALTA) in a transnational action that involves several actors including professionals, stakeholders, families, volunteers and civil society. FA.B! also aims at strengthening networks and enhancing competences of different actors involved in UMC in order to make them able to perform all tasks related to promoting the well-being of the children.